For my 30th birthday, my family gave me a gift coupon for a flight lesson (Schnupperflug) as birthday present. A few days ago, the weather was finally good enough to take the lesson.

I have never flown in such a small airplane (Cessna 152) before let alone being the pilot of it. I was a little nervous at the beginning, but the instructor was very nice and calm. So after a few minutes in flight, I was confident enough to relax a little.

When I got the present, I thought that I would take over the steering wheel after the start and just fly some curves, but the instructor just helped a little and the rest was up to me. So I actually also started and landed the airplane!

At first we were flying west towards Cuxhaven but the visibility was getting bad (below 5 km). So we turned around and did some touch-and-go landings at Uetersen (EDHE). The instructor was pretty impressed. He said it was the first time that one of his students did the third landing alone during his maiden flight. This proves that playing Microsoft Flightsimulator does help. 😉

It was a lot of fun! 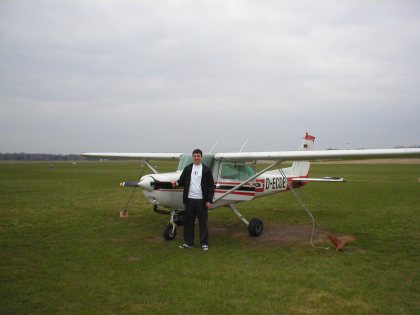